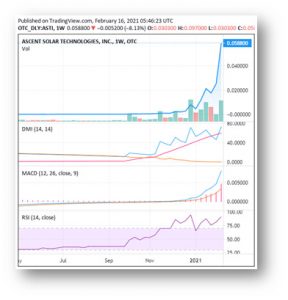 Solar stocks have exploded in popularity and cost over the past two years, but there are still bargains to be found for investors willing to take on some risk. Ascent Solar Technologies Inc. (OTC: ASTI) is an American solar company based in Colorado. The company develops and markets solar panels and chargers using proprietary thin-film technology. Ascent’s products are used in consumer, commercial, military, and aerospace applications.

The financial performance of the company has been mixed, but it’s important to recognize that the business is adapting to a more competitive solar marketplace during an unprecedented health crisis. The company announced in January that it had entered several successful securities purchase agreements to generate capital. Leadership announced that it had secured more than $2 million in an initial purchase agreement and had received $2.5 million in gross proceeds from 2,500 shares sold on January 5.

There’s risk in this pick. It’s an OTA stock and lacks the fiscal transparency of large, listed stocks. However, with a capitalization of $1.06 billion, it’s still a significant bargain stock, and the potential for expansion in the solar market could make this a smart pick moving forward. Despite the risk, the low cost could make shares worth holding in 2021. Momentum is also a positive sign for new investors.