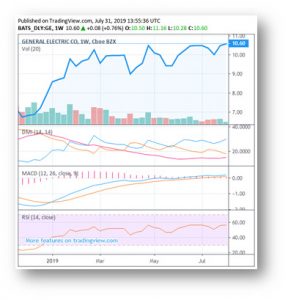 General Electric Co. (NYSE: GE) has been suggested as a top alternative energy stock in recent months, despite the company’s financial woes and ongoing restructure. Investors that have held off on this stock should reconsider it in August, especially considering that price movement has followed a stable path throughout most of this year.

General Electric is a major technology and financial services company. It is one of the world’s largest manufacturers of utility-scale power equipment. It develops and manufactures high efficiency turbines that are used for wind power and other forms of clean and renewable energy.

The company has suffered from poor revenue performance in recent years, as well as cost overruns that compromised profitability. 2018 was a better year as the business started to stage its turnaround. Revenue hit $121.62 billion, an increase of 2.85% year over year and the highest figure in five years. GE reported a gross profit margin of 28.35%.

GE generated $28.83 billion in its most recent quarter, down from $30.10 billion a year ago. However, its EPS performance of $0.17 came in above the $0.12 that analysts were expecting. The company is continuing to cut costs through restructuring, and it stands to profit heavily from the continued boom in alternative energy markets.

General Electric isn’t the financial powerhouse that it once was, but it still represents a strong pick for investors who are willing to wait for a turnaround.