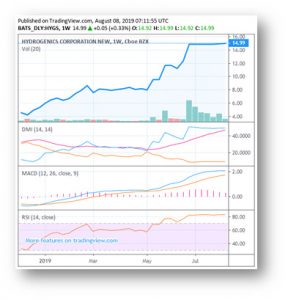 $10 is the ceiling for many alternative energy investors, especially considering that the industry is young and full of opportunity at the bottom. However, ignoring some of the higher-end bargains could result in missed opportunities, particularly when it comes to companies like Hydrogenics Corp (NASDAQ: HYGS).

Hydrogenics Corp. is a developer of hydrogen energy technology. It creates hydrogen generators, fuel cell systems, and fueling stations. It is based in Mississauga, Canada, and is considered a worldwide leader in hydrogen fuel research and development.

This year, revenue performance is picking up. Analysts expect that the company will report a figure close to $10.50 million for the second quarter, which would be a 38% year over year increase. If this happens, stock is expected to move higher. Even if the company misses the consensus, it will only work to make stock more affordable in the meantime. The earnings call will be held on August 12.

Clean fuels are the future of the energy industry, and Hydrogenics already enjoys an enviable position with technologies that are ready to be deployed on a large scale. While today’s fiscal performance won’t impress mainstream investors, the long-term potential is high, making this an excellent alternative pick to consider in August.