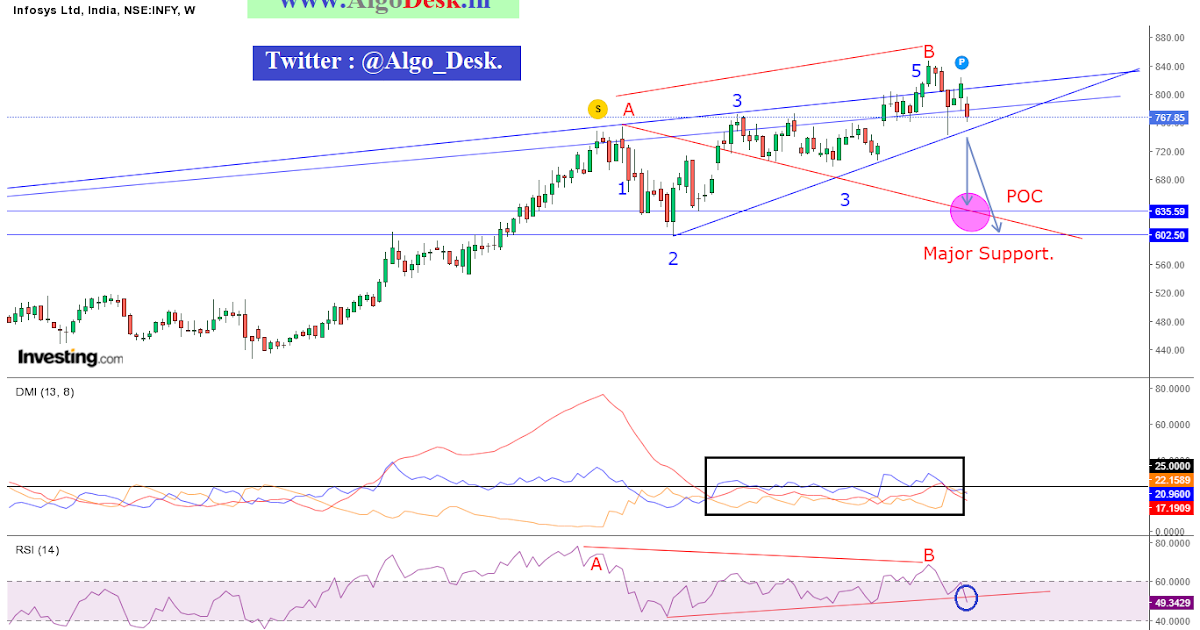 Infosys
At  a  Glance.


As per the charts above

Infosys on Weekly basis has formed a Rising Wedge,

And their is also a Bearish Divergence on RSI,

ADX on the other hand shows that, even though their was a Positive DMI dominance, since the beginning of 2019, but the ADX line was below 25 , thus showing weakness in strength of the on going uptrend.

Now, a rising wedge at the top is itself a signal of caution for the Bulls, that one should get alert , because if we get a BO of this pattern then the trend would reverse at least for Short – Mid Term.

Another point to be noticed is, formation of Bearish Wolf Wave with wave 5 going beyond the wedge and then coming back, again to show signals of lack of strength.

RSI on the other hand, has already broken its support line

( Marked by Blue circle in the RSI indicator ),

Now as we already know that Infy was down 16% yesterday in the US markets, so ideally it should open GAP DOWN today in the Indian Markets as well.

POC and Major support zone marked in the pic above are the probable levels, where Infy can find support.

Only a Valid BO below the Major Support marked in the pic abv, can turn the bias. Because as of now till the time 602 is intact on a Weekly basis , the overall trend will remain positive only.

I know that its too late to bring all this in front of you and Infy will very likely give a massive Gap Down opening today,

And to be very honest, i myself do not have any position in Infy,

But still this is the way one could have figured out the weakness coming in the on going uptrend and found the next support zones.
And if someone could have identified the weakness as explained then at least he / she would not have held a long position in Infy.

I am not a SEBI registered Investment Adviser and my accuracy is not guaranteed. My posts are my personal views and for information / educational purpose only.

Therefore, kindly, do your own research or consult your adviser before trading or making any investment.

I am a Trainer & Mentor, for those who wish to learn Technical Research in Capital Markets. My ambition is to make you self – sufficient, by teaching you from Basics of Technical Analysis to High Probability Trade Setups, so that you gain expertise and make money / create wealth for yourself.