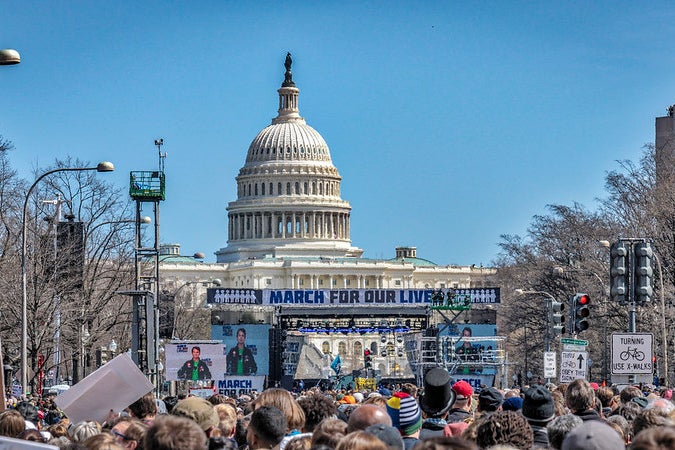 The U.S. House of Representatives late Friday passed a bill to reinstate the “Assault Weapons Ban,” nearly two decades after such a prohibition ended.

What’s the Bill About: The bill that was cleared by the House with a narrow margin of 217-213 votes, seeks to prohibit the “sale, manufacture, transfer or possession of semi-automatic assault weapons as well as high-capacity magazines.”

The votes were mostly split along party lines, with five Democrats voting against the bill, while only two Republicans – Rep. Brian Fitzpatrick (R-Pa) and Rep. Chris Jacobs (R-NY) supported the measure.

“We believe that every American deserves to live in a safe community, where they and their families can thrive,” Speaker Nancy Pelosi said on the floor before putting the bill to vote.

Last month, the “Bipartisan Safer Communities Act” was enacted that called for tough background checks for prospective firearms buyers who are younger than 21 years old. The bipartisan compromise came after a gunman used a semi-automatic rifle to kill 19 children and two teachers in an elementary school in Uvalde, Texas.

In a statement released by the White House on Friday, President Joe Biden said, “Today, House Democrats acted by unifying to pass an assault weapons ban to keep weapons of war off our streets, save lives in this country, and reduce crime in our communities.”

Related Link: What Does The New Senate Deal Mean For Tesla, Toyota And Other Automakers?

Senate Clearance – A Faint Possibility: In the more evenly divided Senate, the proposed legislation carries a slim chance of being passed, the New York Times said. It would require at least 10 Republicans supporting the measure for the bill to see the day of the light.

Irrespective of the final outcome, Democrats can tout their efforts to pass the legislation ahead of the midterm polls, the Times said.

Public Companies To Watch For: Two publicly-listed companies – Smith & Wesson Brands, Inc. SWBI and Sturm, Ruger & Company, Inc. RGR, are firearms manufacturers that may be effected by the legislation.

A House Committee report tabled this week showed that five gun manufacturers Bushmaster, Daniel Defense, SIG Sauer, Smith & Wesson and Sturm, Ruger & Company made over $1 billion over the last decade by selling assault-style weapons to civilians. Only the last two of the companies are publicly traded.