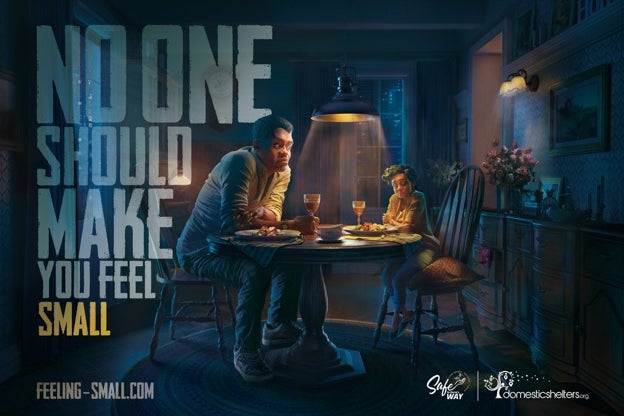 As tensions rise during political debates at the Thanksgiving dinner table or other holiday season gatherings with family, so do incidents of domestic violence, research shows. The societal expectation to be joyous during the holidays often has the opposite effect for abuse victims, which is why two leading domestic violence nonprofits are lighting up the streets of Times Square and beyond this week with their second national domestic violence billboard campaign.

After receiving industry recognition for “The Last I’m Sorry” campaign, Safe in Harm’s Way Foundation, DomesticShelters.org, and Neon, An IPG Health Company are collaborating once again to blow the whistle on domestic violence with another compelling PSA.

The PSA imagery thoughtfully uses the body language of a husband and wife sitting across the dinner table to spotlight the underlying scars of emotional abuse. The man in the image appears to be looming over the woman, physically encroaching in her space, while the woman is simultaneously shrinking in fear, discomfort, and shame. Along with the chilling image, is the take-home message that many abuse victims need to hear– “No one should make you feel small.”

“The essence of this campaign is the feeling one gets when they feel less than or diminished in an intimate relationship. The nuance exists in this unspoken, and painful, relationality between partners. We focused on this simple truth so that people can draw a connection to their own lived experience, even on an intuitive level,” said Sam Lauro, Group Art Supervisor at Neon.

The imagery was crafted using CGI in partnership with Carioca Studio, a full-service visual content house based in Romania, using the elements of body language and expression to bring to life the uncomfortable feeling of being stifled in your own relationship.

Featured on over 340 national screens in high-traffic areas like Times Square’s entrance, Union Station in D.C., office lobbies and elevators, gas stations, billboards, digital bulletins, and mall kiosks throughout the country, this “Small” domestic violence awareness campaign is anything but.

“We’re on a mission to disrupt complacency in a very public way, because getting a message like this in front of domestic violence victims is not an easy task. Abusers using forms of isolation as a weapon to control their victims are to blame for that,” said Caroline Markel Hammond, CEO of Safe in Harm’s Way Foundation.

Safe in Harm’s Way is an online platform that safely connects survivors with healing resources, and provides a one-of-a-kind public database of conviction records. The organization recognizes acts of intense cell phone monitoring, prohibiting contact with family and friends, or generally limiting a partner’s access to the outside world as incredibly common red flags for domestic violence. This form of abusive isolation has driven Safe in Harm’s Way to return to the billboard format over and over, making this campaign the non-profit’s third appearance on national billboards

Ashley Rumschlag, CEO & President of DomesticShelters.org, the largest online searchable directory of domestic violence programs and shelters in the U.S. and Canada, argues that while billboards are a uniquely important medium for reaching domestic violence victims, the journey to formulating an escape plan often starts with a Google search.

“There are over 10 million online searches each month for information regarding domestic violence in just the US and Canada, and we want to be right there on the other end of that search, prepared to offer all of the right resources when victims need it most,” said Rumschlag.

All campaign images mention both Safe In Harm’s Way and DomesticShelters.org, along with the initiative’s microsite Feeling-Small.com developed by Neon, An IPG Health Company. The first of its kind in the space, the site itself is designed as a comprehensive decision tree matrix; a series of directive questions that address visitors’ specific situational needs and provide them with resources based on their answers.

“We kept Feeling-Small.com quick, direct, and as safe as possible, knowing that oftentimes individuals will only have a few precious seconds to get to the help or information they need. Fully equipped with innovative safety features to ensure victims are protected when seeking help, the site is also inclusive, and informative, and we hope it will be a lifeline for anyone who may need it,” said Morgan Mellas, Senior Art Director at Neon.