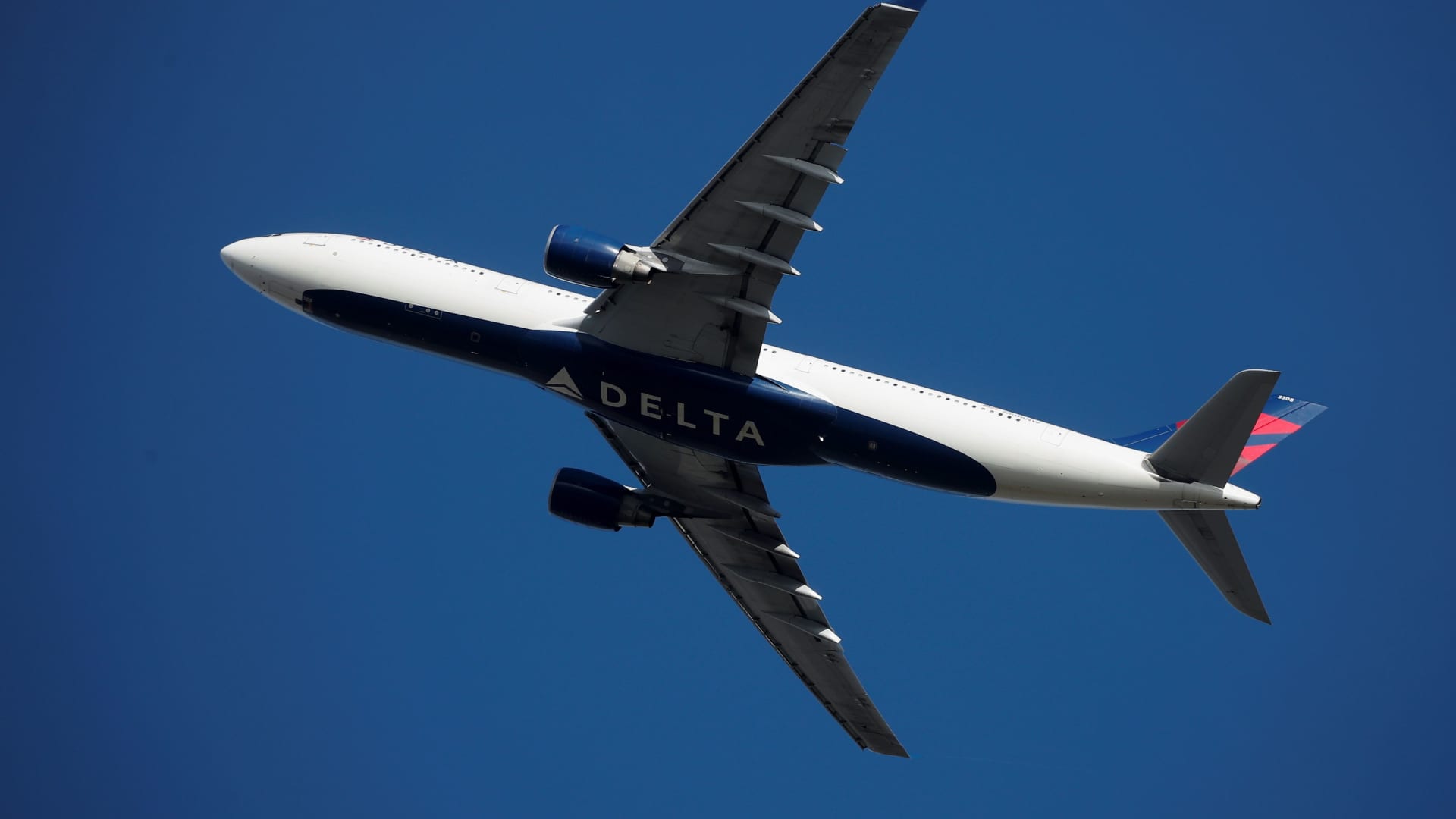 An Airbus A330-323 aircraft, operated by Delta Air Lines.

Delta Air Lines on Wednesday reported a quarterly profit thanks to travelers willing to pay up to fly, more than making up for higher costs.

The carrier also vowed to improve reliability after an increase in delays and cancellations prompted it to scale back its summer schedule.

The airline industry “was starved for revenue for the last two years,” CEO Ed Bastian told CNBC’s “Squawk Box” on Wednesday after the carrier released results. “We pushed too hard. We scaled back a bit … and in July we’re running a great operation.”

Airfare represented one of the few declines in the U.S. inflation report, dropping a seasonally adjusted 1.8% from May to June after large increases.

Delta is capping its expansion, keeping third-quarter capacity to between 83% and 85% of 2019 levels, as it faces backlogs in training new staff.

The company expects a third-quarter profit and reiterated its forecast for full-year profitability.

It expects third-quarter sales to rise 1% to 5% compared with three years ago, along with increased costs, a sign of confidence that it expects fares to remain elevated.

Delta is the first U.S. airline to report earnings for the second quarter. United Airlines and American Airlines announce next week.

Here’s how the company performed in the second quarter compared with what analysts expected, according to average estimates compiled by Refinitiv:

Despite problems during the start to the summer travel season, demand rose for both business and leisure travel, Delta said. Domestic corporate travel sales are 80% recovered from before the Covid pandemic, up 25 percentage points from the first quarter of the year, it said.

A surge in travel demand helped the airline post $735 million in net income. In a measure of how high fares have risen, Delta flew 18% less capacity in the second quarter than it did in the same period of 2019, but it generated $13.82 billion in revenue, 10% more than three years ago.

Delta and other airlines have been comparing their results to 2019 to show their progress in getting back to pre-pandemic performance.

Staffing shortages have exacerbated routine issues like bad weather, driving up the rates of flight cancellations and delays.

Bastian said Delta is limiting its capacity and that it has already improved its performance.

“We had a rough six weeks,” Bastian said, apologizing to customers for the disruptions. “We’ve issued compensation and the appropriate level of apology.”

Over the key July Fourth holiday weekend, Delta allowed travelers to change their flights without paying a difference in fare, an unusual waiver that the airline said allowed customers to avoid potential flight disruptions.

Airline executives and the Federal Aviation Administration have blamed each others’ staffing issues for contributing to the delays. Transportation Secretary Pete Buttigieg publicly admonished airlines for not being prepared for summer travel.

Airport staffing shortages in Europe have contributed to travel chaos with many passengers facing long lines and lost bags.

Delta recently “had a separate charter just to repatriate bags back to customers that have been stranded because of some of the operational issues the European airports were having,” said Bastian. “We did that on our own nickel just to reunite or to help the customers sort their bags as quickly as possible.”

Bastian said Delta added 18,000 employees since the start of 2021 to bring it to 95% of its 2019 staffing. Delta urged and convinced a similar number of employees to take buyouts or early retirement packages earlier in the pandemic, an effort to cut costs.

“We had close to 20,000 people retire a year ago, so the top end … many of our most experienced employees have chosen to retire, and that’s opened up opportunities for younger people,” he said at the time.

The carrier is in the process of training many of its new employees, a headwind as it faces strong travel demand but with many inexperienced workers.

“The chief issue we’re working through is not hiring but a training and experience bubble,” Bastian said on an earnings call Wednesday.

Delta said Wednesday its premium pay and overtime for staff will total $700 million this year, 50% higher than in 2019.

Bastian said the carrier still needs to hire more pilots, flight attendants and mechanics, and that reservations and airport staffing is “largely where we need to be.”

Correction: Airfare dropped a seasonally adjusted 1.8% from May to June. An earlier version misstated the percentage.