The Diet Coke of Sanctions 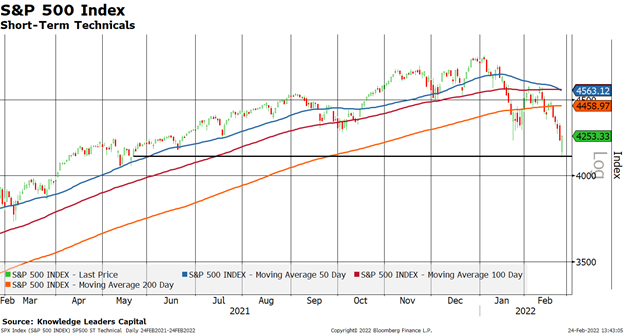 After President Biden’s speech, the consensus seemed to coalesce around the idea that the sanctions put forth were not as strong as they possibly could have been. Chiefly, due to a disagreement with Europe, Russia was allowed to remain in the SWIFT payment system—the system that facilitates global payments.

At about 3am MT, reports came in that Russia’s military was striking multiple sites in Ukraine. This sent the S&P 500 futures reeling into the open, down over 2%. But then, after the President’s announcement of sanctions, things turned higher with S&P futures up 1.64% as of this writing (1:50PM MT).

We saw the same kind of action out of crude oil. Futures gapped higher on the open last night and quickly screamed higher to over $100/barrel. And then, it peaked around 3am MT and began a steady decline for the rest of the day.

We, yet again, saw the same kind of action out of gold. Last evening, the precious metal started spiking, peaking around 4am MT. From there is was slide to the point that spot gold is down .65% on the day.

Could there be some other explanatory reasons for the performance of stocks and oil? Let’s start with oil. Prices have been driving higher all year, yet WTI peaked on 2/14/22. Why?

It may be because sentiment on crude is as elevated as it has been at any point over the last 10 years. It could be that the market was rising all year in anticipation of last night’s military attack, with the expectation that Russian oil supply would be curtailed (like Iran) due to sanctions.

Next, let’s turn our attention to stocks. Just today the AAII sentiment survey was released, showing net bullish sentiment on stocks at the lowest level in 5 years. 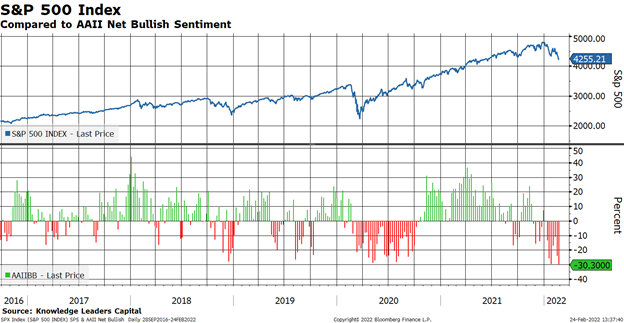 Could this year’s action in the financial markets be a matter of sell on the rumor and buy on the news? Today’s market finish seems to lend some credence to that conclusion. All year, investors speculated Putin would invade Ukraine and in turn get sanctioned, leading to falling risk asset prices, rising oil and extreme sentiment readings on both. But, maybe because we got the Diet Coke of sanctions today, the market decided to buy on the news. There surely will be more chapters in this saga in the days and weeks to come.