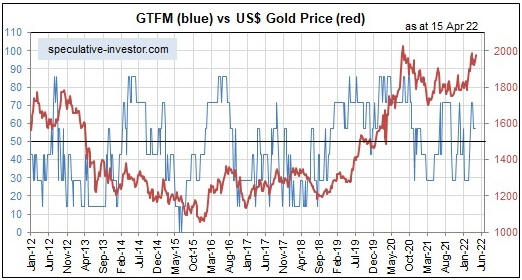 My Gold True Fundamentals Model (GTFM) takes into account the seven most important fundamental drivers of the US$ gold price (the real interest rate, the yield curve, credit spreads, the relative strength of the banking sector, the strength of growth stocks relative to defensive stocks (an indicator of whether the financial world is tilting towards growth or safety), the general trend in commodity prices and the bond/dollar ratio) to arrive at a number between 0 and 100 that indicates the extent to which the fundamental backdrop is gold-bullish. 100 signifies maximum bullishness and 0 signifies minimum bullishness (maximum bearishness).

Although it can be helpful in figuring out when to buy/sell gold-related investments, the GTFM is not designed to be a market timing indicator. Instead, it indicates the direction of the pressure on the gold price being exerted by the fundamentals that matter.

The most recent significant shift in the GTFM (the blue line on the following weekly chart) was from bearish to bullish during the second half of February this year. Four of the seven inputs to the GTFM are bullish at this time, so the Model’s output remains in bullish territory.

I expect that the GTFM will move a little further into bullish territory within the coming month due to the Yield Curve input (one of the three currently-bearish inputs) flipping to bullish.

There are three ways that the Yield Curve input to the GTFM could turn bullish within the next few weeks, one or two of which probably will happen. One way is for the 10Y-2Y yield spread to become more inverted than it was in late-March. A second way is for the 10Y-2Y yield spread to signal the start of a steepening trend, which at this point of the cycle also would be a recession warning. A third way is for the 2-year T-Note yield to generate preliminary evidence of a downward trend reversal, which it could do by moving below its 50-day MA.

The following chart of the 2-year T-Note yield shows that the 50-day MA is a long way below the current yield. However, it is rising rapidly and should be above 2% by the end of this month.

Given what’s happening in related markets, I expect that the GTFM’s February-2022 upward reversal and shift into bullish territory will prove to be sustainable, meaning that I expect the gold market to have a fundamental tailwind for at least several more months.

Executives Are Fleeing Competitors To Join Curaleaf, As Jushi Is Out In The Cold