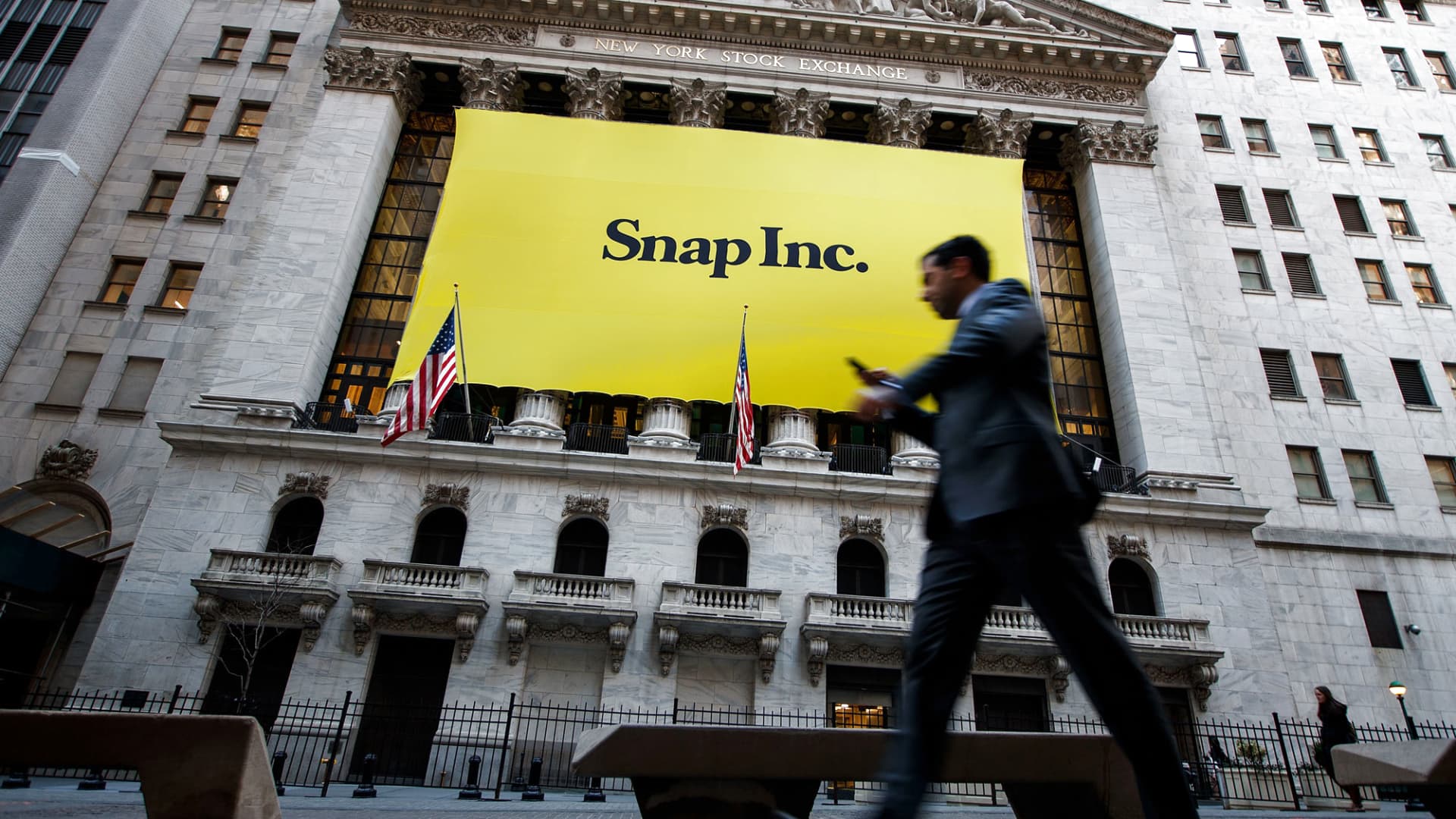 Check out the companies making headlines in midday trading.

American Express — Shares of the credit card company climbed 2.9% as growth in travel and entertainment spending helped American Express beat Wall Street estimates. The company reported $2.57 in earnings per share on $13.40 billion of revenue in the second quarter. Analysts surveyed by Refinitiv had penciled in $2.41 per share on $12.50 billion of revenue.

Snap — Snap plunged 38% after the company reported disappointing results in the second quarter. The Snapchat parent company, which also said it plans to slow hiring, cited Apple iOS changes and slowing demand for its online advertising platform among the reasons for the miss on the top and bottom lines. Snap got hit by a wave of Wall Street downgrades on the back of the results.

Tech stocks — The stocks of tech companies that are reliant on online advertising slipped on the back of dismal results from Snap. Shares of Meta Platforms, Alphabet and Pinterest fell 7.6%, 6% and 14%, respectively, on fears slowing online ad sales could also hit these names.

Twitter — The social media stock inched nearly 1% higher even after the company posted disappointing results in the recent quarter. Twitter cited broader advertising market headwinds and uncertainty related to Elon Musk’s takeover deal among the reasons for a fall in revenue.

Verizon — Verizon shares dropped more than 7% after the company cut its full-year forecast and said it added 12,000 net retail phone subscribers, far below the 144,000 estimated by StreetAccount. Adjusted quarterly earnings fell short of estimates, according to Refinitiv.

Mattel — Shares of the toymaker fell more than 6% despite the company reporting a beat on the top and bottom lines for its most recent quarter. American Girl sales slid almost 20%, Mattel said.

Paramount Global — Shares of Paramount shed more than 3% after MoffettNathanson downgraded the company to underperform and slashed its price target for the stock. The firm said its lower rating was due to the potential for an upcoming recession, which would slow advertiser spend and put additional pressure on the company.

Capital One Financial — Capital One shares dipped 5.7% after the financial services company missed earnings and revenue estimates in the recent quarter. The company reported earnings per share of $4.96 on $8.23 billion in revenue.

Seagate — The technology stock dove 9.1% after missing estimates on the top and bottom lines in the recent quarter. Seagate reported earnings per share of $1.59 on $2.63 billion in revenue.

Intuitive Surgical — The medical devices company’s stock shed 5.7% after missing estimates on earnings and revenue in the recent quarter. Earnings per share came in 5 cents below estimates, according to Refinitiv.

Schlumberger — The oilfield services stock added 4.8% on the back of quarterly results that beat expectations on the top and bottom lines. Schlumberger also raised its outlook for the full year.